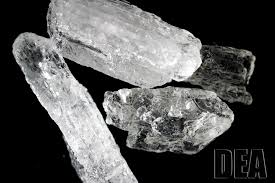 FRESNO – Agents from a California Department of Justice task force joined with California Highway Patrol and federal investigators Thursday night to seize 176 pounds of crystal methamphetamine during the execution of a search warrant at a Madera home. The seizure is one of the largest methamphetamine caches uncovered in the Central Valley.

“Methamphetamine is a very serious threat to California’s public health and safety, and is frequently trafficked by transnational criminal organizations,” Attorney General Harris said. “This seizure highlights the importance of strong collaboration between the California Department of Justice and local, state and federal partners to dismantle these organizations and keep our communities safe.”

Preliminary evidence indicates the methamphetamine in the residence was likely smuggled into the U.S. from Mexico in liquid form, then converted into its crystalized form at the Madera residence for subsequent distribution.

In addition to the drugs, investigators also seized other evidence at the scene, including $58,000 in cash. The residence was vacant at the time of the search and no arrests were made overnight. However, authorities emphasize the investigation is continuing.

The ongoing probe is being conducted by the Central Valley Marijuana Investigation Team (CVMIT) and U.S. Immigration and Customs Enforcement’s (ICE) Homeland Security Investigations (HSI), with substantial assistance provided by the California Highway Patrol (CHP). Other agencies participating on the Central Valley High Intensity Drug Trafficking Area Initiative (HIDTA) include the U.S. Drug Enforcement Administration; the Fresno Sheriffs Department, Madera and Tulare counties; the Fresno and Madera Police Departments; and the State of California Department of Fish and Wildlife.

“There’s no question this seizure has dealt a significant blow to the criminal organization behind this operation,” said Tatum King, acting special agent in charge of HSI San Francisco, which oversees the agency’s enforcement activities in the Central Valley. “Methamphetamine is a powerful drug that devastates entire communities. By keeping this dangerous contraband from reaching our streets reaching our streets, we’ve potentially saved untold lives.”

Thursday’s search warrant was the result of intelligence information provided by the CHP.

“This case is a prime example of the ongoing collaborative efforts between local, state and federal authorities to combat the illicit flow of narcotics through our communities,” said Jason Daughrity, CHP canine unit sergeant.

source: State of California Department of Justice Office of the Attorney General