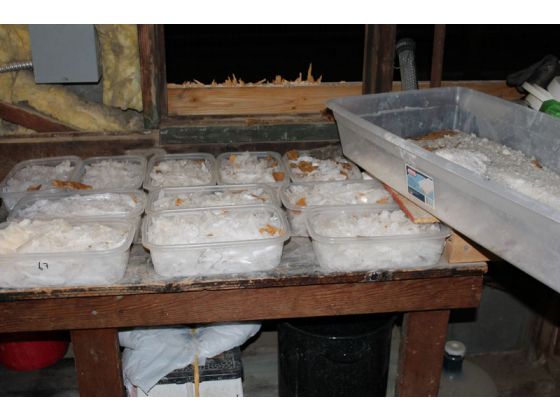 Courtesy of Department of Justice

“Methamphetamine is one of the most toxic drugs available, destroying the bodies and minds of countless people,” Attorney General Harris said. “California is the national epicenter of its trafficking and distribution, so I have made it a priority of the California Department of Justice’s task forces to stop those who would sell and manufacture this debilitating drug. This bust significantly reduces the amount of methamphetamine on our streets, and I thank the agents and partners who worked collaboratively to seize these drugs.”

Agents and detectives arrested Jorge Valdez, 34, and Miguel Angel Sanchez, 24, of Hinkley. Both were booked at the San Bernardino County Jail and are currently being held on $1,000,000 bail each. Both are charged with two felony counts each for the manufacture and possession for sale of methamphetamine and are being prosecuted by the San Bernardino County District Attorney’s Office.

“I stand with my law enforcement counterparts with an unwavering commitment to stop the manufacturing and dealing of narcotics in San Bernardino County,” San Bernardino County Sheriff John McMahon said. “Drug use undermines traditional values and it is our responsibility to put an end to it.”

“Thanks to the extensive work of the Attorney General’s task force and our Sheriff’s Department, we were able to prevent a significant amount of the destructive drug, methamphetamine, from making it to our streets,” San Bernardino County District Attorney Mike Ramos said. “We look forward to prosecuting these individuals to the fullest extent of the law and sending the message that this type of behavior will not be tolerated in San Bernardino County.”

Attorney General Harris is currently working with the state legislature to secure funding for Department of Justice task forces and special operations units that specialize in anti-narcotics investigations.

A March 2014 report issued by Attorney General Harris called the trafficking of methamphetamine a growing threat to the state and a top priority for law enforcement. The report, Gangs Beyond Borders: California and the Fight Against Transnational Organized Crime, is the first comprehensive report analyzing the current state of transnational criminal organizations in California and the threats they pose to the state’s public safety and economy. The report also outlined recommendations to address this problem, which include increased funding for state anti-narcotics trafficking task forces and additional coordination between federal, state, and local law enforcement agencies in combatting transnational criminal organizations.

The report is available here: https://oag.ca.gov/transnational-organized-crime.