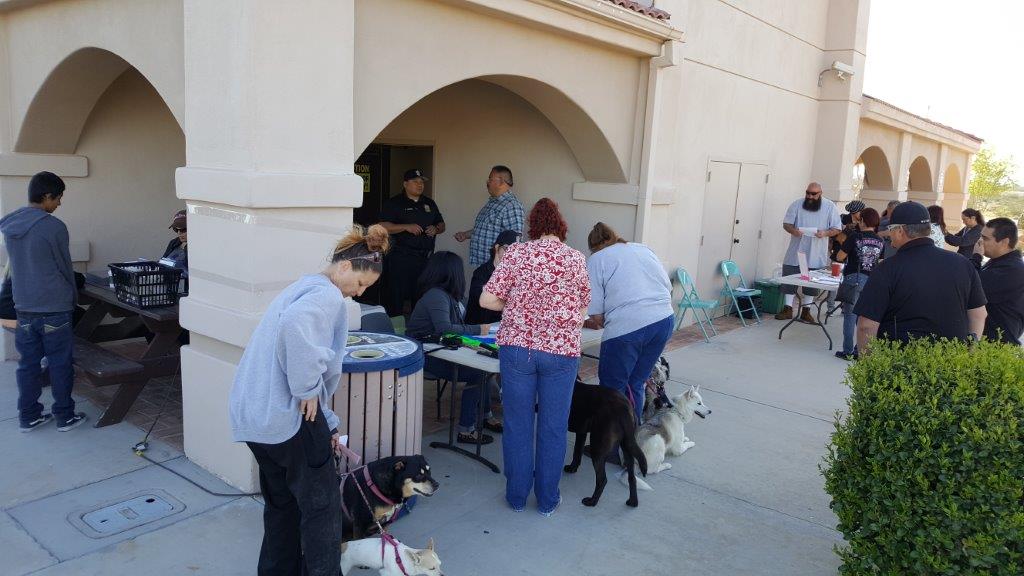 ADELANTO— In what was the first of three Dog License and Vaccination Clinics to be held by Adelanto’s Animal Control Department in 2017, close to 120 residents took advantage of great spring weather and visited City Hall on Saturday, March 18.

“It’s a great program and a great benefit for the community and I just wish more people would take advantage of it,” said Steven Peltier, Community Safety Manager.

According to Peltier, 54 licenses were issued by the city during the three-hour event.

“Each clinic we hold is successful and attendance at Saturday’s event was approximately 16% higher than the average for 2016 added Peltier. During each clinic, for a nominal fee residents could purchase a city license and receive vaccinations by VCA MESA Animal Hospital.

Also participating in the clinic was Victor Valley Animal Protective League (VVAPL), which gave away microchips free of charge for the first 50 pets. Microchips were only $10 for pets thereafter.

“It’s important for pet owners to ensure that their animals are licensed and vaccinated for the protection and safety of pets and owners throughout the city,” said Mayor Rich Kerr. “It’s good to see the spirit of cooperation between our Animal Control Department, VCA Animal Hospital, and VVAPL, each working to serve our residents,” he added.

“This is one of those few times where the entire experience is positive, unlike some of the calls we address on a daily basis,” said Peltier. “During the clinic, I get to go out and mingle with the animals and their owners for the day; it’s great to see the different breeds we have in town and see their owner’s faces light up when someone asks about their furry companion.”

The next License & Vaccination Clinic is scheduled for June 17 from 9:00 a.m. until 12 noon. For more information contact Steven Peltier, Community Safety Manager; (760) 246-2300 speltier@ci.adelanto.ca.us

Victorville Man Dies After Crashing Into Utility Pole in Phelan