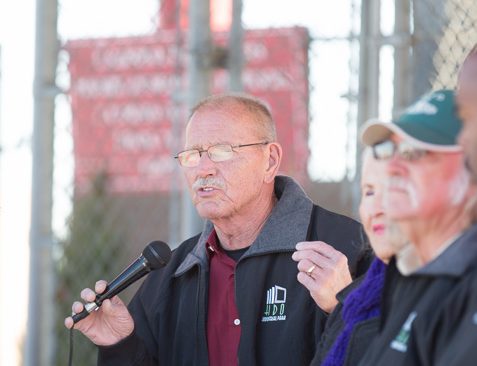 ADELANTO, Calif. (VVNG.com)- They say that Marines are tough, and Adelanto Mayor Rich Kerr had to prove his toughness after taking a tumble on his motorcycle at the Adelanto Grand Prix on Saturday afternoon.

“The Mayor was riding his own motorcycle in the desert followed by his kids and unfortunately his front wheel hit a soft spot and he was thrown from his cycle around 4:30 p.m. on Saturday,” said Michael Stevens, Adelanto Spokesman.

Kerr suffered a broken left collarbone, several broken ribs, and a partial collapsed lung and was taken by ambulance and admitted to St. Joseph Health, St. Mary where he remains today.

“There’s no prognosis on when he’ll be released and although he’s been sedated for pain, he is still responding to text messages and emails, conducting city business from his hospital bed,” said Stevens.

Kerr is not one to shy away from challenging activities, including bull riding during the recent Adelanto Rodeo. “He’s been riding dirt bikes for years so he’s not a beginner,” said Stevens.

Mayor Kerr will be happy to see visitors but is awaiting his doctor’s recommendation to see whether he’ll be hospitalized long enough to receive visitors.