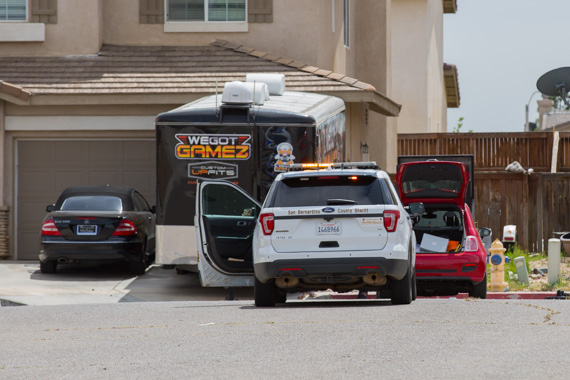 VICTORVILLE, Calif. (VVNG.com) A road rage incident resulted in the arrest of a 21-year-old man after he allegedly brandished a handgun, authorities said.

On Friday, April 7, 2017, at approximately 12:48 pm Deputy Robert Escalera was flagged down in the parking lot of the WalMart located at 12234 Palmdale Road in the City of Victorville.

“It was reported to Deputy Escalera that a subject had brandished a firearm in the parking lot of the business during a road rage incident,” stated a San Bernardino County Sheriff’s press release.

While maintaining a distance, Deputy Escalera followed the subject, later identified as Ke’Heir Jordan Parker to a residence in the 14500 block of Sunflower Court in Adelanto.

“During the drive to the residence, the driver was passing vehicles unsafely, not stopping at stop signs and speeding,” stated Sheriff’s officials.

Deputy Escalera made contact with Parker outside the residence, however, no firearm was found in the vehicle.

Approximately an hour later San Bernardino County Sheriff’s Dispatch received a call of a found firearm. A citizen had found the firearm in the driveway of her residence. While calling dispatch Keheir Jordan Parker knocked on the citizen’s door. Deputies responded to the residence and placed Parker into custody. Further investigation revealed Parker had thrown the firearm out of his vehicle while driving to his residence and the firearm had been reported stolen.

Keheir Jordan Parker was arrested and booked at High Desert Detention Center. Parker is facing charges of exhibiting a firearm, possession of stolen property and reckless driving. Parker was later released after posting bail and is scheduled to appear in court in June.

Anyone with information regarding this incident is asked to contact Deputy Robert Escalera at the Victor Valley Sheriff’s Station at (760) 552-6801. Persons wishing to remain anonymous may report information to WeTip at 800-78-CRIME (27463) or by accessing WeTip’s website at www.wetip.com.