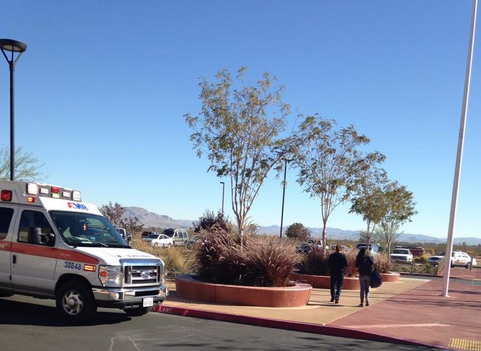 ADELANTO: (VVNG.com)- On Thursday, November 6th, dispatch received a call from Adelanto High School staff, regarding an on campus incident. At approximately 7:50 a.m. a fight between approximately 8-10 female students occurred. The Victor Valley Sheriffs station as well as the San Bernardino Fire Department responded to the school located at 15620 Joshua Road in Adelanto where several students had been pepper-sprayed by school security in order to control the fight.

The short fight caused no major injuries, according to Sheriff’s Spokeswoman, Stacy Parks the San Bernardino County Sheriffs Department responded as a precautionary measure only to medically evaluate the juveniles involved and to treat an asthmatic security guard. No students required transport by ambulance or further treatment after evaluation.

The fight apparently, after questioning by the school officials stemmed from a Facebook incident the night before between some freshman girls. The school was placed on a short lockdown in order to protect the students. At one point witnesses say that up to 20 people got involved in the social media induced girl fight.

Nearly 50 parents rushed to the school fearing for the safety of their children after widespread rumors of a riot, weapons and/or a racially motivated attack. One mother yelled at the staff for not releasing her student fast enough while other parents got in a verbal argument while picking up students.

The Sheriffs Department does not feel the incident was race related and are continuing their investigation. No students were cited or arrested at this time.