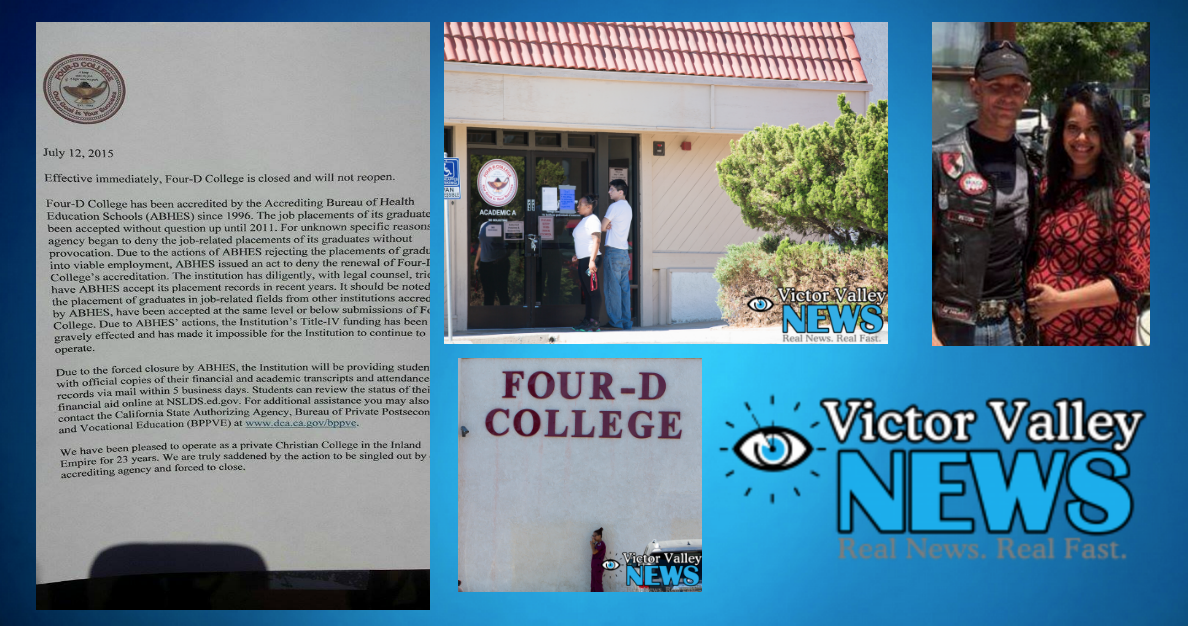 VICTORVILLE-(VVNG.com): On the morning on Monday, July 13th students and staff at Four-D College went to the campus as usual, some to complete their college career in order to get a job in a medical related field and others to go do their job at the school. Students were the main focus of the initial reaction since they could be seen, clearly distraught wondering what the closure meant for their education. Some students reported being only weeks from graduation after making sacrifices to provide a better life for themselves and their families.

Employees went to work, just days from their July 15th payday showing dedication to the job that some carried for many years.

“I was with career services, so I worked to place the graduates. The Smith family actually held meetings two weeks ago to let all the employees know that everything was ok and that we had nothing to worry about,” said employee Will Hazlet.  He said that when the staff arrived at the school, they arrived to the same letter on the locked doors as the students, only they also had their belongings locked inside the closed doors. They since got a letter sent to their homes to alert them to the end of their health insurance coming at the end of the month.

Hazlet also a part of Bikers Against Child Abuse (BACA), a veteran and a first-time father with a baby due in less than two months is left with many questions. His paycheck for the past two weeks has not been mentioned and the owner of Four D College, Linda Smith, a self-proclaimed Christian and motivational speaker at this time has failed to respond to his message to her.

Employees understand that the lack of contact from Smith may be due to the parties she is busy attending as seen on a recent Facebook posts that she was tagged in. The post mentions her attendance at a lavish family party complete with margaritas and grilled lobster. She also has several scheduled, for cost, motivational speaking events where she speaks about how to run a successful business. All this, while employees are left to wonder where their next meals will be coming from, how their rent or house payments will be paid and how they will move on from this sudden job loss.

The letter on the door of the school calls the closure a “forced closure” by the ABHES yet the ABHES rebuts the claim.

On a July 13th letter the Accrediting Bureau of Health Education Schools (ABHES) said, “ABHES does not agree with the statements describing the basis for the ABHES actions. Furthermore, Four-D has exercised its right to appeal the decision and therefore remains accredited by ABHES at the present time pending the resolution of the appeal”.

In the July 13th letter it  also mentioned that students can contact the Closed School Unit of California Department of Consumer Affairs Bureau for Postsecondary Education at (916)431-6932.

Hazlet has since applied for Unemployment benefits and says he wonders how a Christian woman can move on, not caring about all the displaced students and staff. He says he does not know how long the benefits will take to receive, but he knows that even if these are approved they will only be a small percentage of what he made at his job.

His wife, who is soon due to have the couple’s first child had to leave work due to a back injury so his job was the sole source of their income for their now growing family. A friend, also part of BACA (Bikers Against Child Abuse) started a gofundme account to help Hazlet get through these trying times with a few less immediate financial worries.

“It was my BACA family that created it I wasn’t even aware. Now I have received help from BACA brothers and sisters all over the country  and veterans from my former military unit,” he added. If you would like to help Hazlet and his wife while they make other arrangements to pay bills that should have been paid by the paycheck they have not yet received you can contribute to the Go Fund Me Account.