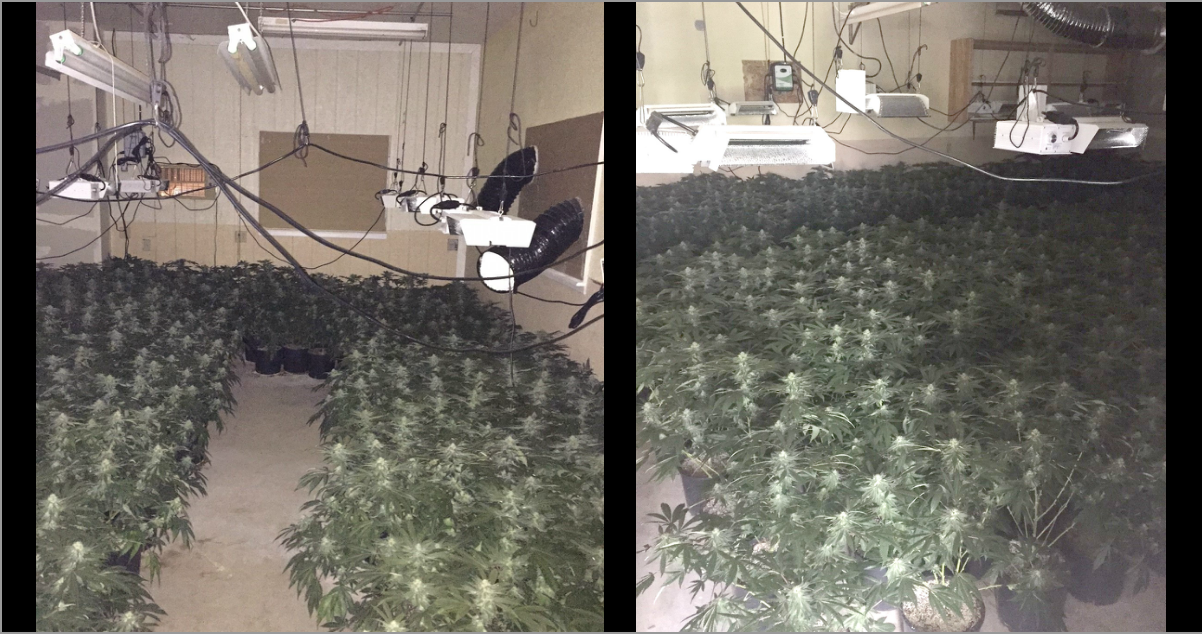 APPLE VALLEY, Calif. (PRESS RELEASE) – On Thursday, June 1, 2017, at 9:20 a.m. the Apple Valley Police Department responded to 11397 Saratoga Road to assist fire department personnel that responded to a report of a fire at a residence.

Members of the fire department discovered the fire was most likely caused by a main power line that malfunctioned and melted. The line fell into the shrubbery in the back yard and ignited a fire behind the residence.

They entered the residence to ensure no one was inside and to make sure there was no damage to property. Once inside, they discovered an indoor marijuana grow with several hundred marijuana plants.

The Sheriff’s Marijuana Enforcement Team served a search warrant at the location. Investigators found a large-scale indoor marijuana grow inside the house.

Over 750 marijuana plants, in various stages of growth, were found inside the residence. The grow operation used advanced lighting, air conditioning, fans, exhaust blowers and an air-filtering system to control the climate inside the house as well as the odor coming from the residence.

The suspect(s) were stealing electricity at the location to facilitate the growing operation. Loss Prevention Investigators from Southern California Edison (SCE) assisted in the electrical theft investigation. Suspects who grow marijuana illicitly will commonly bypass the electrical meter installed by the electrical company. This is done because of the high amount of electricity needed to support the marijuana growing equipment. The high usage may alert the utility company or law enforcement to the illegal marijuana grow. Additionally, the suspects do not get charged for the high amount of electricity being used.

The extreme measures taken to avoid being caught not only risks the lives of the suspects but also endangers the public living near the residence. An electrical short caused by the modified wiring most likely would have resulted in an explosion or fire in the residential community causing possible injuries to bystanders near the residence. SCE will complete their investigation and send the report to the sheriff’s department. Meanwhile, the electrical power to the residence will be disconnected so the faulty wiring and electrical bypass can be removed and repaired.

The fire at this location is believed to have been caused by the overload of electricity passing through the power lines. The heat generated by the electricity caused the lines to fail and come apart.

Investigators are in the process of identifying the suspects involved in this investigation. Once they are identified, the investigation will be completed and sent to the San Bernardino County District Attorney’s Office for a criminal complaint against them. Anyone with information regarding this investigation or is urged to contact the Sheriff’s Gangs/Narcotics Division at (909)387-8400. Callers wishing to remain anonymous are urged to call the We-tip Hotline at 1-800-78-CRIME (27463) or you may leave information on the We-Tip Hotline at www.wetip.com.

Woman and Child Injured in Multi Vehicle Crash on Highway 395