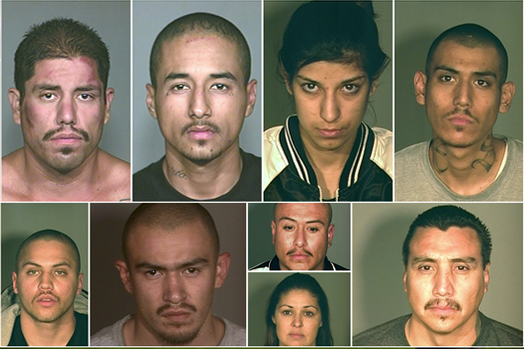 VICTORVILLE-(VVNG.com):  After nearly five years and two indictments against 73 members of the Victorville-based East Side Victoria street gang, the largest gang case in San Bernardino County history is officially closed.   The Eastside Victoria is a street gang located primarily in Victorville was founded in the late 60’s to early 70’s by individuals including 50-year-old Fred Archuleta, the reputed head of ESV.

ESV members are  said to be responsible for three decades of crimes including murder, manslaughter, attempted murder, assault with a firearm, sale of methamphetamine, auto theft, extortion, robbery, and burglary. Many members are also said to be associate with the Mexican Mafia.

The last of these indictments was that of Cherish Velez, 25, of Apple Valley, who was sentenced Tuesday, January 6th  in Victorville Superior Court to 16 years in state prison on six counts involving conspiracy to sell methamphetamine, conspiracy to manufacture methamphetamine, and assault with a firearm.
“For decades, this local criminal street gang has wreaked havoc in our High Desert region,” District Attorney Mike Ramos said. “Thanks to the hard work of the Victorville Police Department, Supervising Deputy District Attorney Britt Imes and all of our support staff, we have sent 61 gang members and their associates to state prison for a total of 485 years.”

In June 2007, investigators from the Victorville Police Department Gang Unit commenced an eight-month long investigation of Archuleta. Investigators discovered evidence of an ongoing conspiracy to sell methamphetamine between Archuleta, Robert Mancillas, Raymond Mancillas and dozens of other members and associates of ESV.

At the conclusion of the investigation of Archuleta and the Mancillas Brothers investigators learned that George “Rascal” Degraw was soon to be released from state prison.

“It was well-known among members and associates of the gang that Degraw was given the ‘keys’ to the desert,” said Imes. “In other words, his job was to operate all Sureño gang activity on behalf of the Mexican Mafia.” Degraw had already sent instructions to gang members to assemble firearms and inform drug dealers of the need to pay taxes, added Imes. At the end of the Archuleta/Mancillas investigation, law enforcement began laying the groundwork for continuing the investigation when Degraw took over the gang.

In June 2008 investigators from the Victorville Police Department Gang Unit commenced a seven-month long investigation of George Degraw, the reputed new head of ESV, Andrew Camarena, Christopher Alvarado and Joel Pompa. During the course of the investigation, investigators uncovered extensive “taxation” of drug dealers, the transportation and sale of a large quantity of methamphetamine, and the commission of violent crimes (robbery, carjacking, assault with a firearm and extortion).

“Investigators even learned that one person was lured to a motel room and assaulted with a firearm for a dope deal gone bad,” said Imes. Investigators also uncovered a methamphetamine lab being operated on behalf of the gang as well as dozens of firearms from gang members and associates.

“It was during this part of the investigation that investigators were also able to establish the gang’s direct connection to the Mexican Mafia through the payment of ‘taxes’ extorted from local drug dealers,” said Imes.

“Ultimately, these investigations significantly damaged the criminal operations of East Side Victoria,” said Imes. “In addition to the existing gang injunction, these investigations helped take a part of the criminal element out of Victorville. By putting so many gang members and associates out of business for such a long time, it severely disrupts the criminal enterprise while having a positive impact on the community and the lives of the law-abiding citizens of Victorville.”