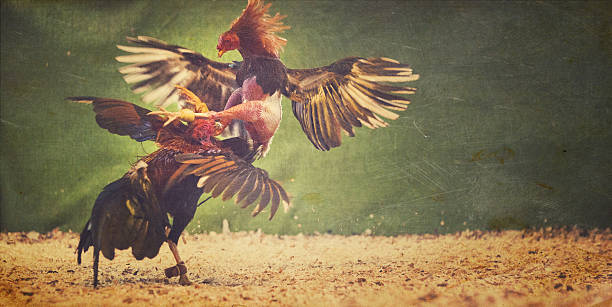 HESPERIA, Calif. (news release) – Deputies Rob Oakleaf and Randy Stanley, of the Sheriff’s Department’s Rural Crime Task Force gathered information regarding a fighting game bird operation at a residence in the 11000 block of Eleventh Avenue in the City of Hesperia.

A search warrant was obtained for the residence and both detectives and deputies from Victor Valley, Apple Valley and Hesperia Sheriff’s Stations assisted in the service of the warrant.

During the service of the search warrant many roosters were found housed in separate cages and tethered separately on the property. Hesperia Animal Control officers assisted with the investigation at the residence and seized 305 birds from the location.

A rifle was located at the compound and the resident, Jesus Pena Lua, 47, of Hesperia was found to be a convicted felon. Pena Lua was arrested and booked at High Desert Detention Center on charges of felon in possession of a firearm and possession of fighting game cocks. Pena Lua was later released after posting bail.

Anyone with information regarding this crime is urged to contact at Deputy Rob Oakleaf or Randy Stanley at Victor Valley Sheriff’s Station, Lucerne Valley Substation, (760) 248-7655. Persons wishing to remain anonymous can report information to WeTip by calling 1-800-78-CRIME, or by accessing the website at www.wetip.com.