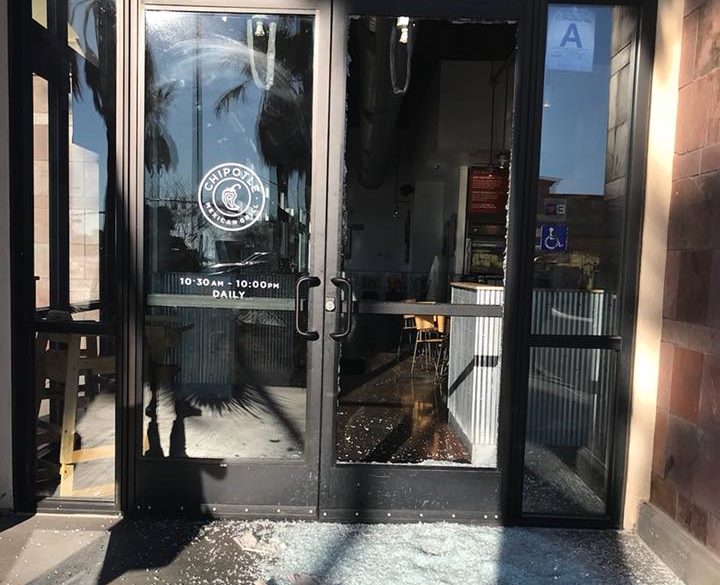 VICTORVILLE, Calif. (VVNG.com) –The Victorville Police Department are investigating a rash of break-ins where at least three businesses were hit overnight Saturday in the Victorville area.

The first of the three break-ins was reported at 1:50 am, on March 17, 2018, after 911 dispatch received a call from an alarm company reporting an active alarm at a business in the 15600 block of Roy Rogers drive. “When deputies arrived they found the front glass door had been smashed. Nothing was reported missing and suspect(s) had fled the scene,” sheriff’s spokeswoman Mara Rodriguez told Victor Valley News.

At 2:12am, deputies responded to the Outback Steakhouse in the 12400 block of Amargosa Road after the alarm company called to report an activated alarm.

Victor Valley News obtained surveillance footage that captured the moment the thieves broke into the business. In the video, an unidentified suspect with a dark-colored hoodie is standing outside the business door as he waits. Seconds later a white four-door sedan pulls into the parking lot and reverses into a stall. A second unknown suspect exits from the rear passenger side door and together the two men shattered the glass door with an unknown type object before making entry. The driver of the vehicle was never seen exiting the vehicle.

Rodriguez said, deputies responded and again found the door was smashed, however, nothing was reported missing and the suspect(s) were gone when deputies arrived.

At 2:40am, deputies were dispatched to the Chipotle Mexican Grill in the 14100 block of Bear Valley Road after once again, receiving an activated alarm call from the alarm company. When deputies arrived, they found the same situation, front door was smashed, appeared nothing was missing, and the suspects were gone. At this location the cash register had been moved from its usual location but left behind.

This boarded up door at Outback Steakhouse on Amargosa Road is where the suspects broke into the business. (submitted photo)

“Although the deputies arrived at the locations within just minutes, the second and third locations-within 2 to 3 minutes of dispatch receiving the calls, the suspect(s) were able to leave the locations,” stated Rodriguez. “I mention this as a reminder that even those few minutes of delay between the alarm companies getting the information and contacting dispatch and dispatch entering the call and getting a deputy in route, may be just enough time for a business to sustain a loss.”

“This is an important consideration for businesses that may leave cash in their registers overnight or leave other valuable property unsecured. These three businesses were more fortunate than some who have fallen victim to commercial burglaries previously,” stated Rodriguez.

Anyone with information on any of the burglaries or involved suspects are asked to call the Victorville Police Department at (760)241-2911.