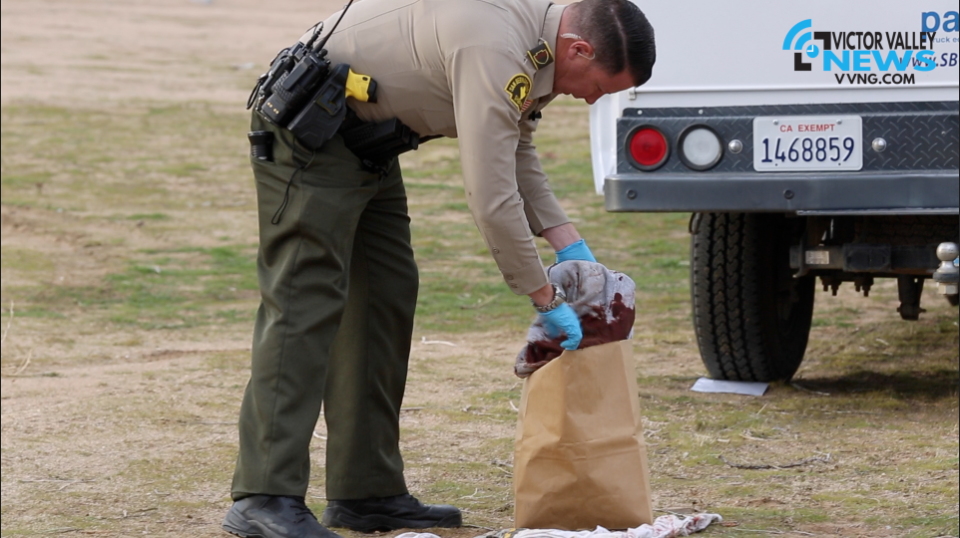 VICTORVILLE, Calif. (VVNG.com)- A man was airlifted after being viciously attacked by two pit bulls, prompting a deputy to shoot and kill one of the dogs.

At about 4:30 p.m., dispatch received reports of a dog attack in the 14500 block of Anacapa Road in Victorville.

According Angel Avalos who witnessed the attack, the man tried to fight off the dogs but was unsuccessful.

“After he tried, he fell to the ground and just covered his head and the dogs got on top of him and bit him everywhere,” Avalos said.

“I drove my truck up to the man and was trying to run them over because I didn’t know what else to do, the man was in bad condition.”

Victorville Deputy S. Hamilton told Victor Valley News that when he arrived he was forced to shoot the dog 4 times, killing it. Hamilton said the dog was still acting extremely aggressive.

Wendy Avalos lives on the front property of where the attack occurred and said the dogs belong to a woman who lives in a trailer located at the rear of the property.

According to Avalos, the dogs have a record of being aggressive towards her children, and she’s repeatedly asked the owner to please do something about it.

“I feel so sad for the man. He was just walking down the alley and next thing you know he’s getting mauled by two crazy dogs,” said Avalos.

Animal control arrived and removed the deceased dog from the property. Sheriff’s officials are searching for the second dog that left.