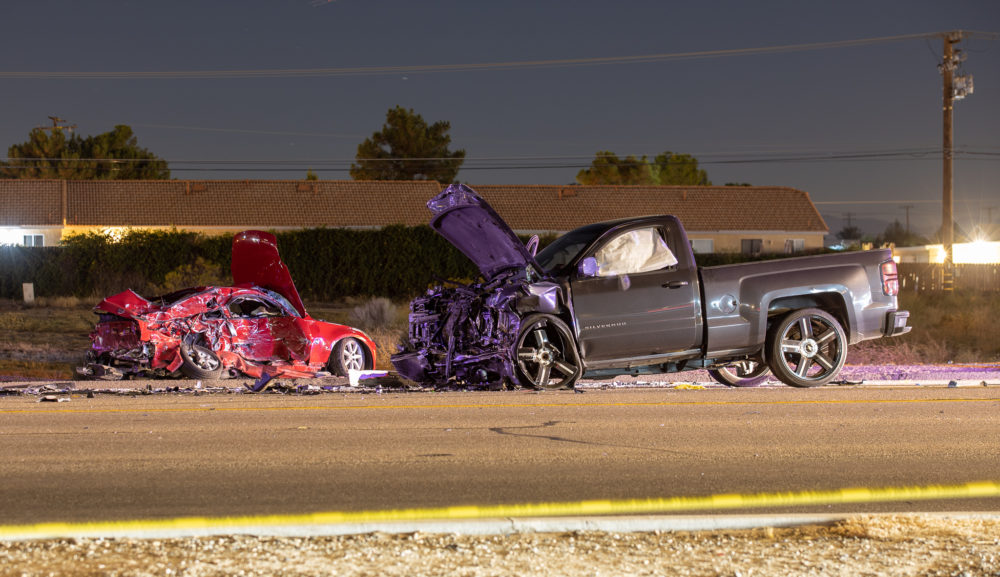 “I was driving east on Bear Valley Road towards Apple Valley, the same direction as the pickup truck when the crash happened,” stated Frank Olvera. “Cars were beginning to go around the crash, probably not realizing how bad it was.”

Olvera said he began driving around the wreckage too, until he noticed a bystander yelling for help near the red car. “A bystander was yelling for help and I got off my car and walked over to him and noticed the red car was hit on the passenger side,” stated Olvera. “I looked in and saw a man about 20 years old, in his seat with the seatbelt on, just slumped over with no pulse.”

Initially, Olvera said that he and the other Good Samaritan thought the driver of the red car had fled the scene after he was nowhere to be found.

“We thought the driver took off when we didn’t see him. We were focused on helping the passenger,” Olvera said. “I didn’t want the car to catch fire, so I reached in and took the keys out of the ignition,” said Olvera. “That’s when we saw the other man about 10-15 feet away in the dirt field, unconscious.”

A neighbor in the area started CPR on the driver, while a male and a female officer began CPR on the passenger, Olvera said.

Despite life-saving measures, the driver and passenger of the red vehicle were pronounced deceased at the scene. The driver of the pickup truck did not require medical transportation and is expected to recover from his injuries.

Several witnesses said they witnessed the Nissan traveling at a high rate of speed, weaving in and out of lanes before it lost control and went into opposing traffic.

“The red Nissan was weaving in and out of traffic, I witnessed the impact and it looked like the Nissan hit him,” Tara Martinez commented in the Victor Valley 411 group on Facebook.

At least two other vehicles traveling eastbound appeared to be involved in the crash and remained at the scene, and a woman from a black Honda was transported to a local hospital with non-life-threatening injuries.