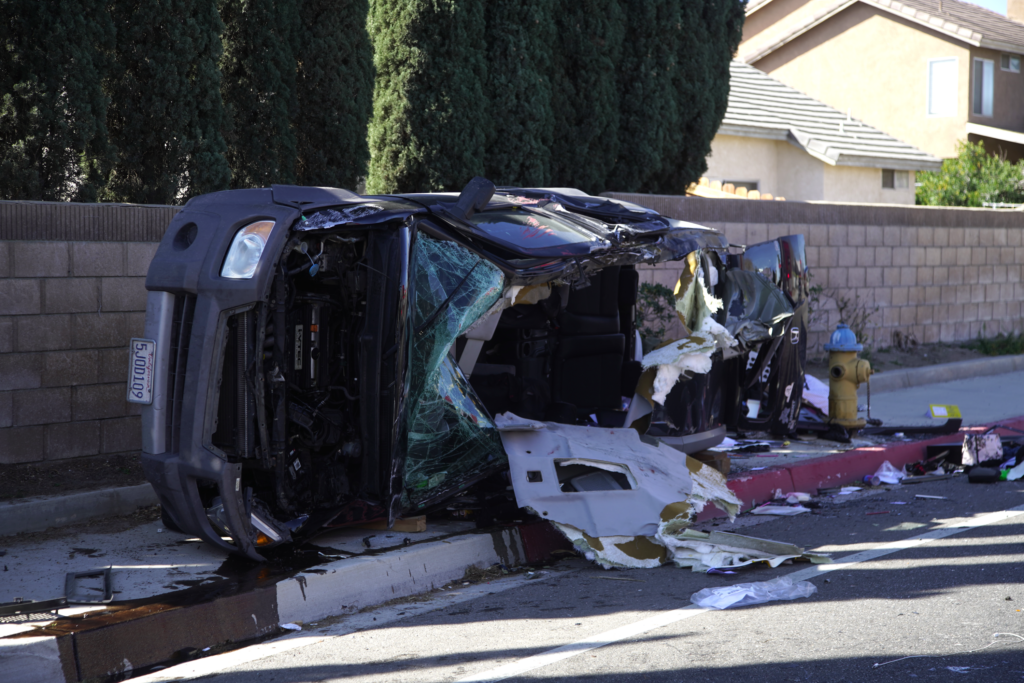 VICTORVILLE, Calif. (VVNG.com) — A pregnant woman and a man were injured in a single-vehicle rollover crash Monday morning in Victorville.

It happened at about 9:17 am, on March 7, 2022, in the area of La Mesa Road and Del Gado Road. For reasons still unknown a dark-colored Honda Pilot lost control and overturned multiple times before coming to a stop along the sidewalk near a fire hydrant.

Several bystanders stopped to help the victims and were assisting with stabilizing the vehicle prior to the arrival of emergency personnel.

Battalion Chief Andrew Roach, with the City of Victorville Fire Department, told VVNG they responded to a report of a rollover crash with victims trapped inside of the vehicle.

“Upon arrival, crews found two patients who were trapped inside of a vehicle which had rolled on La Mesa and was blocking traffic,” stated the Batallion Chief. Fire crews worked to stabilize the vehicle and immediately began extrication efforts.

Firefighters reported they had a total of two patients, one critical and another with minor injuries.

The Batallion Chief said the critically injured victim was a pregnant female. A Mercy Air helicopter landed on the field of nearby Liberty Elementary School and subsequently airlifted the woman to a trauma center.

The Battalion Chief shared the following advice to local residents:

“We have some major thoroughfares here in Victorville and we see a lot of these types of incidents whether it’s on La Mesa, whether on Palmdale, Hesperia Road, or any of the freeways, we just ask the public to drive safely, use due regard because unfortunately, we do respond to a fair amount of these type of incidents on a day to day basis,” stated Andrew Roach.

La Mesa Road between Del Gado and King Canyon Road was closed in both directions for the duration of the investigation. The official cause of the accident is under investigation by the Victorville Police Department.