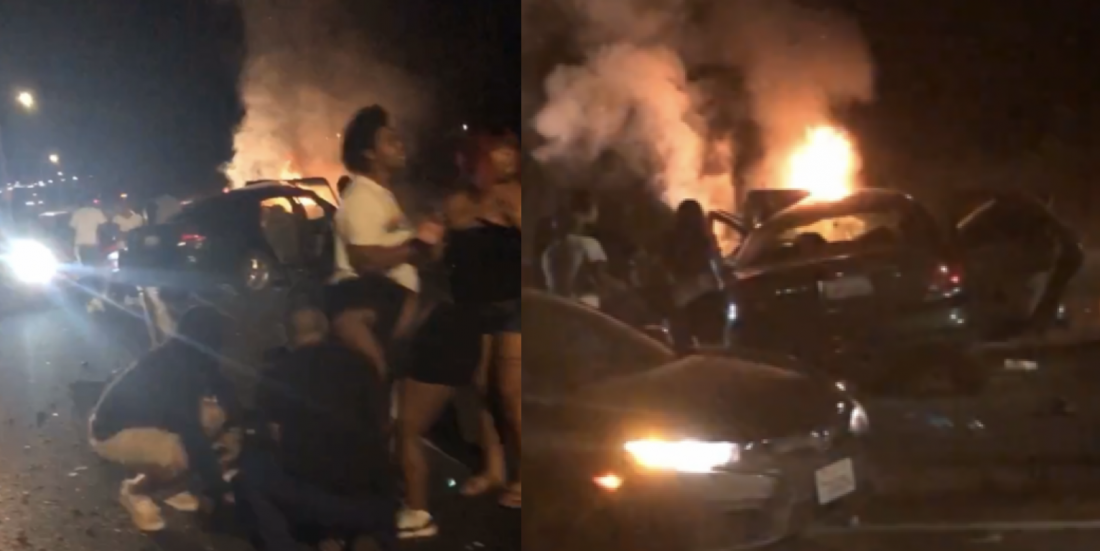 On Thursday, May 28, 2020, at approximately 12:20 am, deputies from the Victorville Police Department responded to the intersection of Hesperia Road and Seneca Road for a major injury traffic collision. Multiple callers reported the collision and stated one of the vehicles was on fire and occupants were trapped inside, officials said.

According to a news release, “the engine compartment of the Ford caught fire as a result of the impact and the fire began to spread to the passenger compartment. Multiple deputies used fire extinguishers from their patrol units to keep flames from spreading further into the vehicle, as they awaited the arrival of Victorville City Fire Department personnel. Once on scene, fire personnel were able to extinguish the flames and both drivers were extricated from their vehicles.”

Both drivers were flown to nearby trauma centers for treatment of their injuries. Driver two was said to be in stable condition, the condition of driver one is not known at this time.

Two passengers in the Ford were able to get out of the vehicle without the assistance of first responders. One passenger was treated for non-life threatening injuries and the other was not injured.

“It appears driver one was traveling northbound on Hesperia Road at a high rate of speed. He lost control of the vehicle and struck driver two’s vehicle head-on, as she traveled south on Hesperia Road,” stated the release.

Officials said approximately 40-50 family members, friends, and on-lookers were at the scene of the collision. They began fighting amongst themselves and became aggressive with deputies attempting to help the involved parties and maintain the safety of the accident scene. Additional deputies from Apple Valley, Hesperia, and Victor Valley Stations assisted at the scene to help control the crowd.

The investigation is continuing and anyone with information about this investigation is asked to contact Deputy M. Lee at the Victorville Police Department at (760) 241-2911 or Sheriff’s Dispatch at (760) 956-5001. Callers wishing to remain anonymous are urged to call the We-Tip Hotline at 1-800-78CRIME (27463) or you may leave information on the We-Tip website at www.wetip.com.