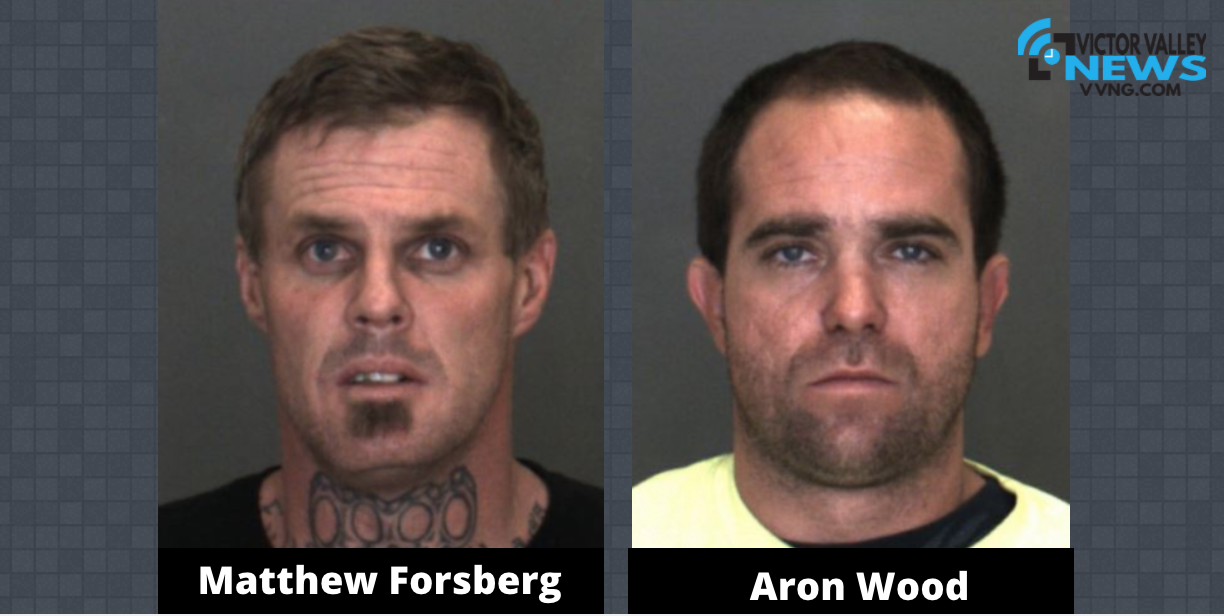 On January 3, 2018, at 9:48 pm, deputies were dispatched to a burglary alarm at the Spirit River Café located on 16000 block of Apple Valley Road. Within two minutes of the call being dispatched, Deputy Daniel Ponce arrived and found a 2003 black Chevy Tahoe in the parking lot occupied by two subjects, later identified as Matthew Forsberg and Aron Wood. As Ponce attempted to contact Forsberg and Wood, Forsberg accelerated through the parking lot and exited onto Apple Valley Road.

Deputies pursued the vehicle north on Apple Valley Road where the suspect vehicle reached speeds of 90 miles per hour. At the intersection of Falchion Road, the suspects drove into the open desert and eventually a rock quarry. Six minutes into the pursuit, the suspects abandoned their vehicle. Wood was taken into custody with the assistance of Sheriff’s Aviation. Forsberg was initially able to evade capture.

The following morning, Deputy Jody Watson from the Hesperia Station and agents from State Parole attempted to contact Forsberg at a residence in Hesperia. Forsberg attempted to flee on foot and was taken into custody without incident. During the course of the investigation, it was confirmed Forsberg and Wood were also responsible for the burglary of the Hair Emporium located in Victorville. This incident took place one hour prior to the burglary of the Spirit River Café. Evidence from both burglaries was recovered inside the vehicle which is registered to Forsberg’s wife.

Forsberg is currently on parole for PC 245(a)(1), has extensive law enforcement contacts throughout the High Desert, and is listed by the State of California as a Career Criminal for possession of a stolen vehicle. Forsberg is charged with Penal Code 459 – Burglary, Vehicle Code 2800.2 – Felony Evading, and is also being held on a parole violation. He is currently incustody at the High Desert Detention Center and as is being held without bail.

Wood is currently on Post Release Community Supervision (PRCS) for Health and Safety Code 11378 – Possession for Sales. He began his supervision term on November 26, 2017. He is also on probation for Penal Code 29800(a) – Felon in Possession of a Firearm. Wood is charged with Penal Code 459 – Burglary, Penal Code 466 – Possession of Burglary Tools and is being held on a PRCS violation. He is currently incustody at the High Desert Detention Center and is being held without bail.

Anyone with additional information is asked to contact Detective Lopez at the Apple Valley Station.