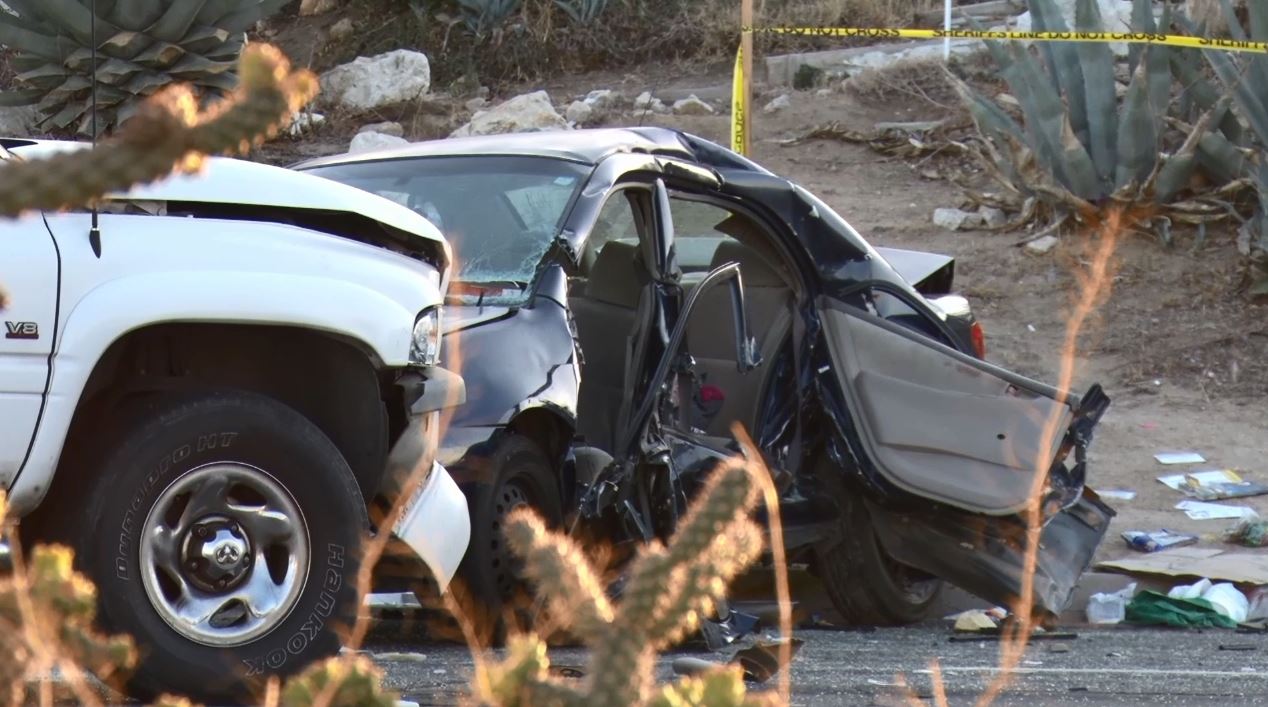 UPDATE 2/15@9:40 AM — The driver of the Toyota was transported by ambulance to a local hospital, where he succumbed to his injuries. His name is being withheld, pending notification of next of kin.

Upon arrival, first responders located a white Dodge Ram truck and a Toyota Corolla with major damage and blocking the intersection of Village Drive and Puesta Del Sol Drive in Victorville. Two adults and three children inside the sedan were injured and requiring medical attention.

Due to the number of injuries, firefighters upgraded the response type to a mass casualty incident (MC).

According to San Bernardino County Fire spokesman Eric Sherwin, two pediatric patients were airlifted from the scene to Loma Linda University Medical Center and three other adult patients were transported by ground ambulances to various hospitals.

Sherwin confirmed the initial call was reported as requiring extrication but was unable to confirm if firefighters required the jaws of life to extricate any victims. The driver of the pick-up truck declined medical treatment at the scene.

Deputies determined that a Blue Toyota Corolla was traveling west on Puesta Del Sol Drive, and upon entering the intersection, the Toyota was broadsided by a Dodge pickup truck traveling north on Village Drive.

Alcohol or drugs are not suspected to be a factor in this crash.

Neighbors in the area are expressing frustration over the safety of the road where tonight’s crash occurred.

In February 2017, an 11-year-old boy walking home from school was struck by a vehicle on Village Drive near Puesta Del Sol Drive, as he attempted to run across the street.

“That area is very dangerous! The cars come flying around that bend! I take my kids to Puesta Del Sol School and I’m so scared to cross!,” stated Vero Juarez.

Vero told Victor Valley News she plans on starting a petition in hopes of getting the city to do something. “I would really like to see a traffic signal or 4-way stop sign installed. A lot of kids walk home and have to cross Village…it’s so dangerous.”

Anyone with information about this investigation is asked to contact Deputy Alejandro Ramos or Deputy Chris DeKeyrel at the Victorville Police Department, (760) 241-2911. Callers wishing to remain anonymous are urged to call the We-Tip Hotline at 1-800-78CRIME (27463) or you may leave information on the We-Tip website at www.wetip.com.