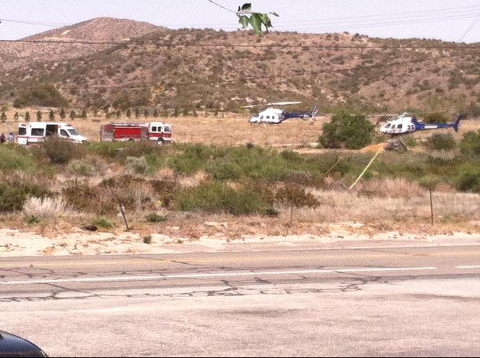 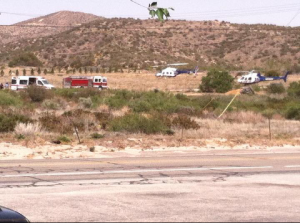 On April 23, 2013 at about 2:50 p.m, Deputies from the Hesperia Station and units from the California Highway Patrol along with rescue personnel from the San Bernardino County Fire Department responded to a report of a two vehicle, head on traffic collision in the area of Hwy 138 and Little Horsethief Ranch Rd. in Hesperia.

It was reported that the two vehicles had collided head on and that there were serious injuries to several parties.

Rescue personnel arrived on scene and discovered that the male driver of a 1991 Ford Explorer was trapped inside his vehicle and suffered fatal injuries upon impact.

The driver was later identified as Robert E. Miller, age 57 of Victorville. A male passenger from that same vehicle was suffering from injuries, not life threatening.

Three occupants from the second vehicle, a 1999 Toyota minivan were also seriously injured, one with life threatening head injuries.

Rescue personnel extricated the victims from their vehicles and all were transported to Arrowhead Regional Medical Center by both air and ground transportation.

The Hesperia Station Major Accident Investigation Team (MAIT) responded to conduct the investigation. It was determined that for unknown reasons the driver of the Ford Explorer who was traveling east on Hwy 138 at an undetermined speed, crossed over into the westbound lanes and collided head on into the Toyota minivan as it traveled west on Hwy 138.

Hwy 138 was closed in both directions between Summit Valley Rd. and Hwy 173 until about 1930 hours while investigators processed the scene for evidence.

At this time the exact cause of the collision and why the driver of the Ford Explorer crossed into the westbound lane is still under investigation by the Hesperia Station Traffic Division MAIT Investigators.

Anyone who was in the area and witnessed the collision is asked to contact Deputy Chad Gomez at the Hesperia Station, Traffic Division at (760) 947-1500