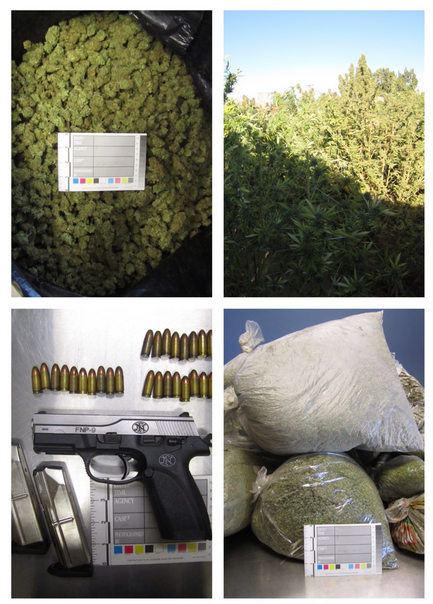 The properties search each contained large-scale outdoor unsecured fenced outdoor marijuana cultivations. During the investigations they were determined to be illegal and not consistent nor compliant with the California medical marijuana laws.

Additional suspects have been identified and have prosecution pending. The amount of marijuana seized at the individual locations suggests the suspects had no intention of abiding by the states medical marijuana laws.

Investigations such as this one conducted by the Marijuana Enforcement Team continue to reveal sophisticated criminal organizations cultivating and distributing marijuana throughout San Bernardino County while attempting to utilize medical marijuana recommendations in an effort to conceal their illicit operation. Investigators regularly find the marijuana is being distributed throughout California without any effort to comply with state laws. Additionally, state and federal laws do not permit the transportation or distribution of marijuana outside of California.

The County of San Bernardino has an ordinance prohibiting outdoor marijuana cultivations. San Bernardino County Code Enforcement personnel assisted with administrative enforcement of the County Code violations. The Sheriff’s Narcotics Division will continue to enforce California marijuana laws as well as the San Bernardino County Ordinances regarding marijuana cultivation and distribution. Persons found to be violating state marijuana laws and county ordinances or utilizing California medical marijuana protections under false pretenses are subject to fines, prosecution and seizure of property.