VICTORVILLE: Ken Bettencourt has set out on a journey that began in the state of Rhode Island on June 13, of 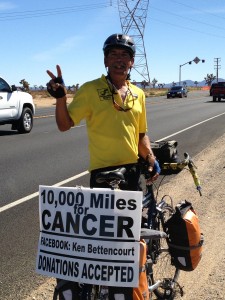 this year. Before it ends Ken will have traveled a total of 13,000 miles through out the United States, eventually ending back in his home town of Providence, Rhode Island. Ken made the decision to start this trip 1 year after loosing his grandson Kenneth III, who lost his battle to childhood cancer.

We met Ken, as he made his journey along U.S. Highway 395 south through Victorville. He explains his purpose for doing this bike ride is to help raise the necessary funds so that Rhode Island Pediatric Center can afford to purchase a much-needed fully equipped transportation bus. The bus would be used by low-income children suffering from various types of cancers who require transportation to and from the center.

Back in Rhode Island, “They have a home similar to the Ronald McDonald House, most of the children have infant leukemia. It’s a place for children suffering from cancer and most of the families don’t have very much money. When my grandson was going through chemotherapy the bus broke down twice on them, and it’s just not good.” says Bettencourt.

Through a few sponsor’s Ken is raising the funds needed. Ken tell’s us that, for every mile traveled Hasbro Toy Company is giving $1 to the Rhode Island Pediatric Center. Additionally Ford Motor Company has decided to match it and so far they have already given $10,000 towards the cause.”

By trait Ken is a Culinary Arts Chef and he recently did a “voluntary lay-off”, from his employer. Explaining how two of his fellow co-workers we’re both in situations where they struggled and he decided to give up his hours. Requesting from his boss to split the hours up between his two co-workers. “I need them kids in a safe bus”, he told his former employer and said goodbye.

When Ken started his journey he brought a long a small bike trailer, needed to carry his supplies. After realizing it 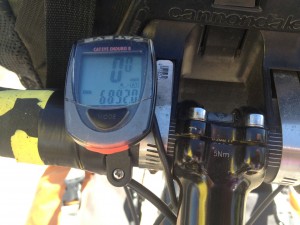 was unnecessary weight he decided to get rid of it. As he made his way along the Pacific Coast Highway, Ken gave away his trailer to a fellow bike rider. Only carrying required essentials to survive they are tightly secured to his bike. He sleeps in a small tent, nightly selecting safe places to camp. When he stopped to chat with us, his bike odometer read 6,892 miles.

Ken is truly an inspiration and we wish him safe travels all the luck needed to help accomplish his journey with a cause. He is now headed down Main street in Hesperia traveling to Highway 247 where his next pit stop is Yucaipa.

Suspects Arrested for Possession of Narcotics For Sales