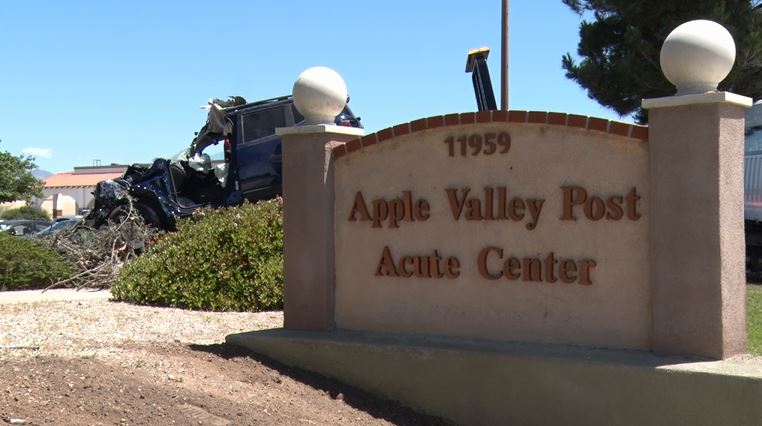 APPLE VALLEY, Calif. (VVNG.com) –Firefighters had to use the jaws of life to extricate two people trapped in a vehicle after crashing into the Apple Valley Post Acute Care Center Wednesday afternoon.

Firefighters from the Apple Valley Fire Protection District arrived and located a dark-blue vehicle with major damage after crashing into the exterior of the building.

A 42-year-old female driver and her 63-year-old male passenger were both trapped inside the vehicle and requiring extrication.

A medical helicopter was requested to land at St. Mary’s hospital and airlift the female driver to an out of area trauma center as a precaution. The passenger suffered only minor injuries.

According to a witness, the female driver was exiting from the nearby Target parking lot when she had a medical emergency and drove across Apple Valley Road and stopped after crashing.

Apple Valley Building & Safety responded to check for damages and the integrity of the structure. No occupants in the building were injured.

The inside of the nursing facility was not damaged and the cause of the accident is under investigation by the Apple Valley Police Department.