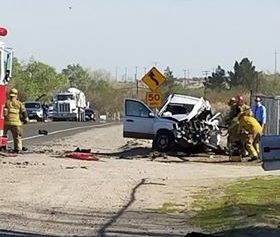 It happened at about 8:20 am, in the 20800 block of National Trails Highway, near Robinson Ranch Road.

Firefighters with San Bernardino County Fire responded to the scene and extricated two adult patients, a 37-year-old man in a red 2017 Hyundai Sonata and a 39-year-old woman in a white 2001 Ford Escape, both residents of Helendale.

A 7-year-old girl in the Escape was helped from the vehicle and transported by ground ambulance to Victor Valley Global Medical Center and later flown to Loma Linda University Medical Center.

“There was a dead dog in one of the vehicles,” said Halseth.

According to California Highway Patrol Officer Michael Mumford, the Ford was traveling north and the Hyundai was traveling in the opposite direction.

“For reasons still under investigation both vehicles collided head-on in the northbound lane,” stated Mumford.

Drugs or alcohol are not believed to be a factor in this collision and all occupants were properly restrained, officials said.

The official cause of the crash remains under investigation by the Victorville CHP station.

CHP Officers are asking anyone who might have witnessed the crash to contact the Victorville office at (760)241-1186.

THC Lab and over 1500 plants seized from Hesperia home